Read below for my paddle updates detailing the journey from Newquay to Wales including my Channel crossing – here’s to waving goodbye to England!

After a lovely night listening to Cornish sea shanties courtesy of Newquay Rowing Club, it was up at 4.30 (their bed time) for a 5.30am departure. I knew I needed to reach Trevose headland one hour before High tide, had been warned it would be interesting with the spring tides and still 4-6 feet of surf… so maximum effort it was! Could rest after that hurdle, and cruised towards Bude against the tide, met a brilliant fisherman Johnny Murt @murts_shellfish who brought me some laughs whilst out to sea. Post coming shortly about my rescuer based in Crackington Haven…

Late start due to tides, headed out to Hartland point in beautiful sunshine, unfortunately this didn’t last. North Devon cliffs bigger than expected and no camping beaches to be seen… Around Hartland point and Putsborough is looking a long way away. Clouds coming in and south westerly winds picking up to 4+ force meant a sprint to first suitable beach in the near dark. landed just as the sun set and had the small highlight of spotting two porpoises and a storm petrel! 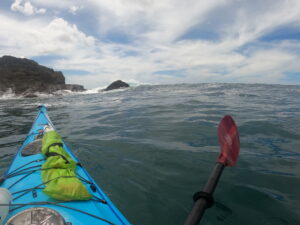 The plan: rest day with a short trip to Ilfracombe. Repair my sail and plan out my channel crossing to make a smooth trip

What actually happened: The first phone signal in 3 days brought the news that my week of a calm weather window had disappeared. A decision had to be made, leave now late in the morning with no planning, but with a chance of reaching the Gower and a warm caravan. Or be stuck in  tent in Ilfracombe to wait out the wind and rain for 3 days. To Ali’s delight I’m sure, I chose the former, risk and all.

Dashed down from my phone signal perch on the cliff, grabbed a head torch and some cereal bars – the essentials, and it was a go. Took a bearing and knew I needed to head towards true North, set off more Easterly to allow for a late tidal stream coming in from the West, counts as a plan right?

A few hours in and I spot a distant cloud of steam, I don’t think anyone’s ever been so glad to see Port Talbot steel works… now starts a fun coastline game of guess the Bay. Decided it had to be Tenby and I carried on a little more East.  Did I say Tenby? I meant Swansea Bay, definitely Swansea. Course corrected back North and was helped along by a Western tide towards Port Enyon. A few extra miles paddled due to the Welsh coastline all looking the same, and a final 2 hour slog in strong wind and I land in Wales!