Mull of Kinytre to Kilberry

As a classic introduction to Scotland, I spent the night fighting off Midgies and crashing surf. A fitful sleep at best. At 4 am I braved a peak out the tent to see the surf not too bad and tide looking low. Started to get packed up to get off ‘doom beach’ as quickly as possible. (Nicknamed by yours truly, since the cross, smashed up yacht and grave had such unsettling energy… ) 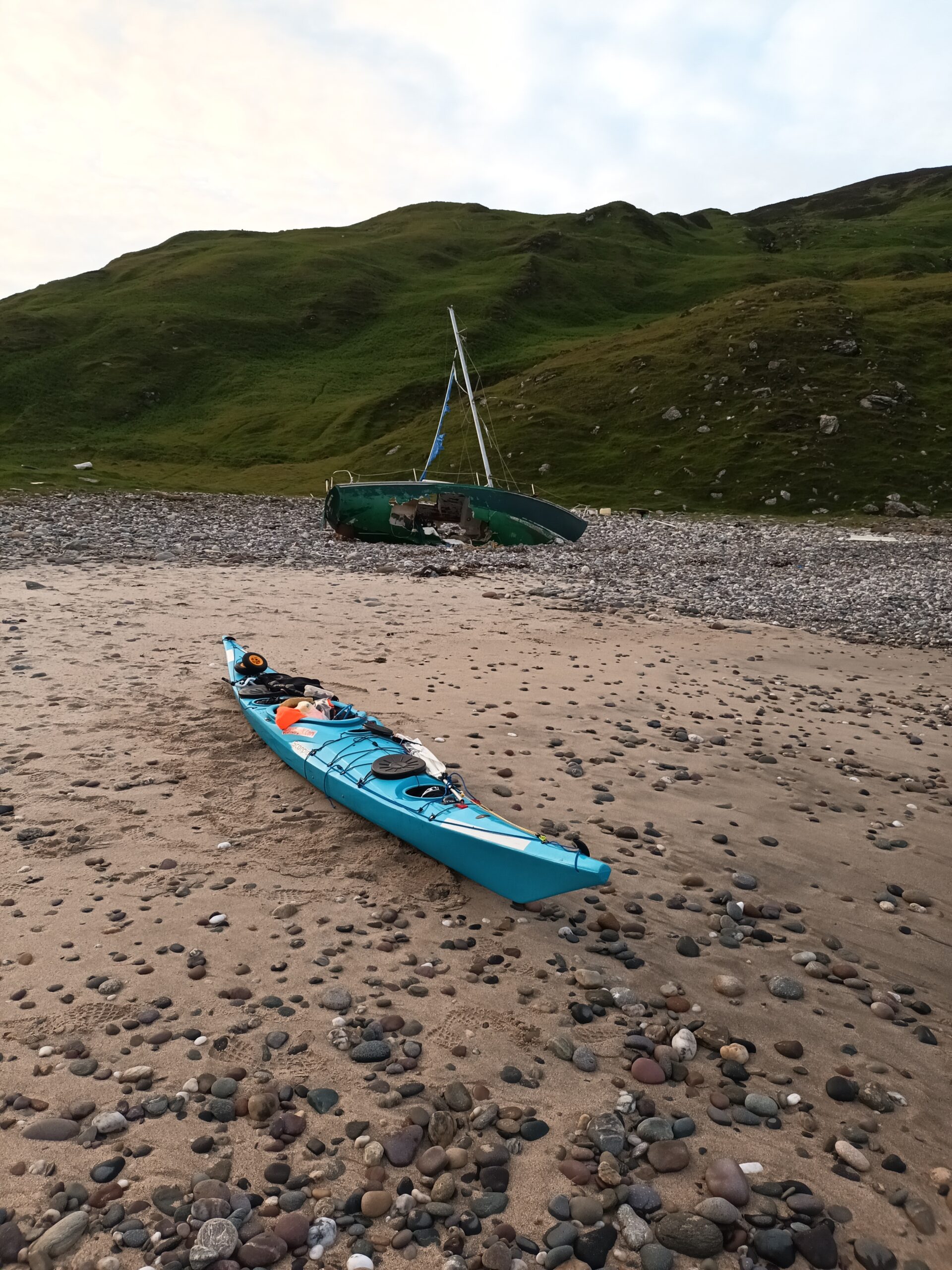 By the time I’m almost ready 45 mins has passed and the surf has been steadily building up bigger. I don’t want to be trapped on any beach, let alone this one. Could win an award for speed-packing at this point. I pushed off just in time for a big set. Unlucky again!
After back paddling and riding a few waves there’s a gap by the rocks. Finally, I was out. Close. That woke me up!
Further up the coast at the next landing the surf was huge and I saw waves breaking a long way out. If I’d tried yesterday it could have been another disaster and I felt glad to have made the right call to set up camp when I did. The only choice is to paddle further up the sound and hope the islands give some protection. No landing till its safe, now is not the time to be taking any risks.
Mid afternoon and there’s shelter. The sun peaked out and there were lots of seals in the clear sea water. Enjoying the scenery, I relaxed and enjoyed paddling.
By evening, I felt like I’d made good progress and set up my tent at the next spot that looked promising for camping. As if they’d sensed I had had a good day, the midges and rain blessed me with their (highly annoying) presence. Oh well. My good mood from getting off the beach of doom and escaped the surf remained.
Kilberry to Oban
The regular damp start to morning putting and packing up wet kit from yesterday.
Unfortunately, forecast did not seem so good for coming days. I had two days before the winds picked up a lot and would make everything harder, so I knew I needed to do a big push today, no early night on the cards that was for sure. At the current moment there was a good following wind (blowing from behind me) so i seized the opportunity to put the sail to good use, and it worked a treat. It was a bit misty  so I’d made sure to put my phone in a waterproof bag inside cockpit. With many inlets and islands to navigate, I’d need it. Gradually the mist worsened and heavy rain started. Ah well- I was wet anyway. 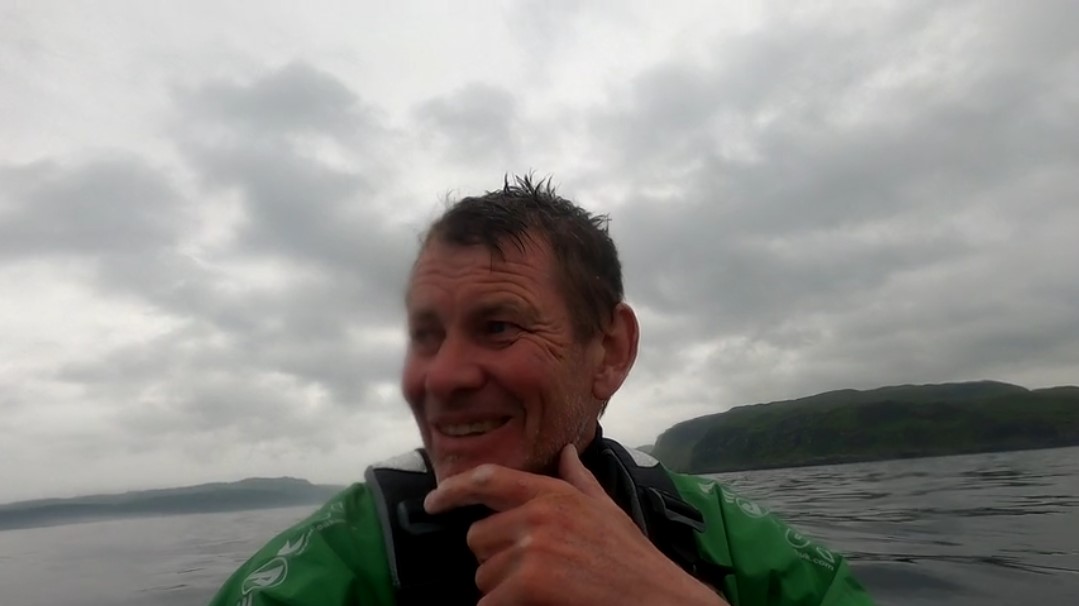 Mid afternoon it cleared up a bit and I’d bumped into some more island before Shuna Islands. There are whirlpools and big eddies – calm sections formed because water is detouring around small whirlpools that are slower than the main body of stronger current. This is part of the Corryveckan currents (one of the largest permanent whirlpools on earth and one of the most dangerous stretches of water around the British Isles). I made an effort to paddle hard and ferrygliding (allowed the current to move me sideways) and I got clear.
I headed for the Clachan seil passage. Here, I spotted black guillemots for the first time on my journey. Then, I was lucky enough to witness a breaching minke whale. This was a brilliant experience.
I thought it might take 2 days to get up the passage, as it is very shallow and has a 7 knot current. However, I managed to arrive at the perfect time (with the high tide) and get through in one day.
Along the passage, there were lots of lovely camp spots. However, I would rather get through the passage. Once I made it to the end of the passage, I found myself on a rocky beach.  The beach was shrouded in fog and it begun to drizzle. This made it impossible to see the next route. I unpacked the tent and checked the weather – which brought bad news. I was to expect 30 knots from the west, meaning I needed to get myself closer to Oban. I decided to rush to repack, and luckily had a compass bearing so I could set off, but it is very late at this point.
After a few more miles of kayaking, I could make out the outskirts of Oban. Through the rain, I found an orchard. I even had to keep my canoe gear on as I put up the tent to try to get out the harsh weather. All night, the heavy rain and wild wind continued.
I hoped to reach Oban the next day as the local fire station were generous enough to agree to put me up for the night.
17th June
The morning started like many (outting on wet kit that had been rained on overnight), but the difference about this particular morning,was that it was my birthday – 57 years old! Cracking on with the paddling, I reached Oban and ‘Seakayak oban’ kindly agreed to care for my equipment whilst I stayed at the fire station.

I dragged the kayak on a trolley along the seafront, having to walk through the streets and hold up some traffic… I have a feeling I was a bit of a spectacle. Why did the kayaker cross the road? To find firefighters! (alternative answers are welcome, best one wins).
I met a fellow kayaker and firefighter named Richard. He helped load up the fire land rover and my kit. We arrived at the station to a warm welcome and a much appreciated coffee.
I was most excited about the fact that they had a drying room. My kit was finally dry after 6 days of nightly rain! I am especially grateful to Richard who took my clothes home with him to wash. After this, I was off for a birthday meal and pint at the pub. 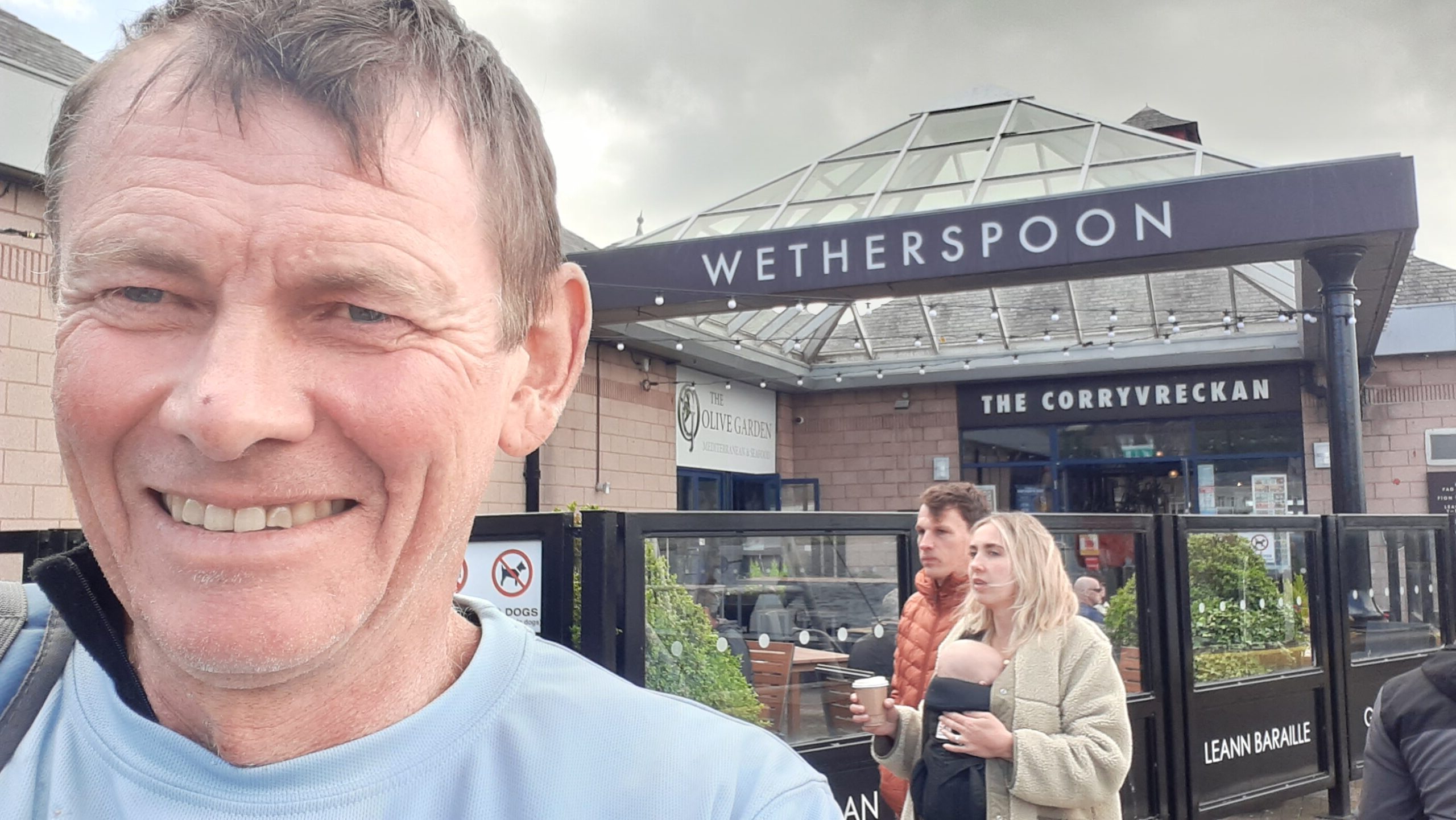 Also at the station, I showered shaved and ate well, aswell as recieving birthday wishes from home. Everyone on duty made me feel extrodinarily welcome. It was a great way to spend my birthday, and I was happy to go to bed clean, dry and warm.
Waking up on the 18th, there was strong weather with headwinds. I made the decision not to kayak on the west coast. The weather was just too unsettled and unpredictable, making it unsafe. Instead, I decided to re-route and head up the Caledonian canal to Inverness. Although this was disappointing, I simply couldn’t run the risk of getting into more trouble and being forced to call on the RNLI for help again! That meant choosing safe options.
Spending another day in Oban, I got myself a film ticket for Top gun as a belated birthday treat! Definitely needed to enjoy myself. It was then time to leave the fire station, I cannot thank the firefighters enough for their hospitality. 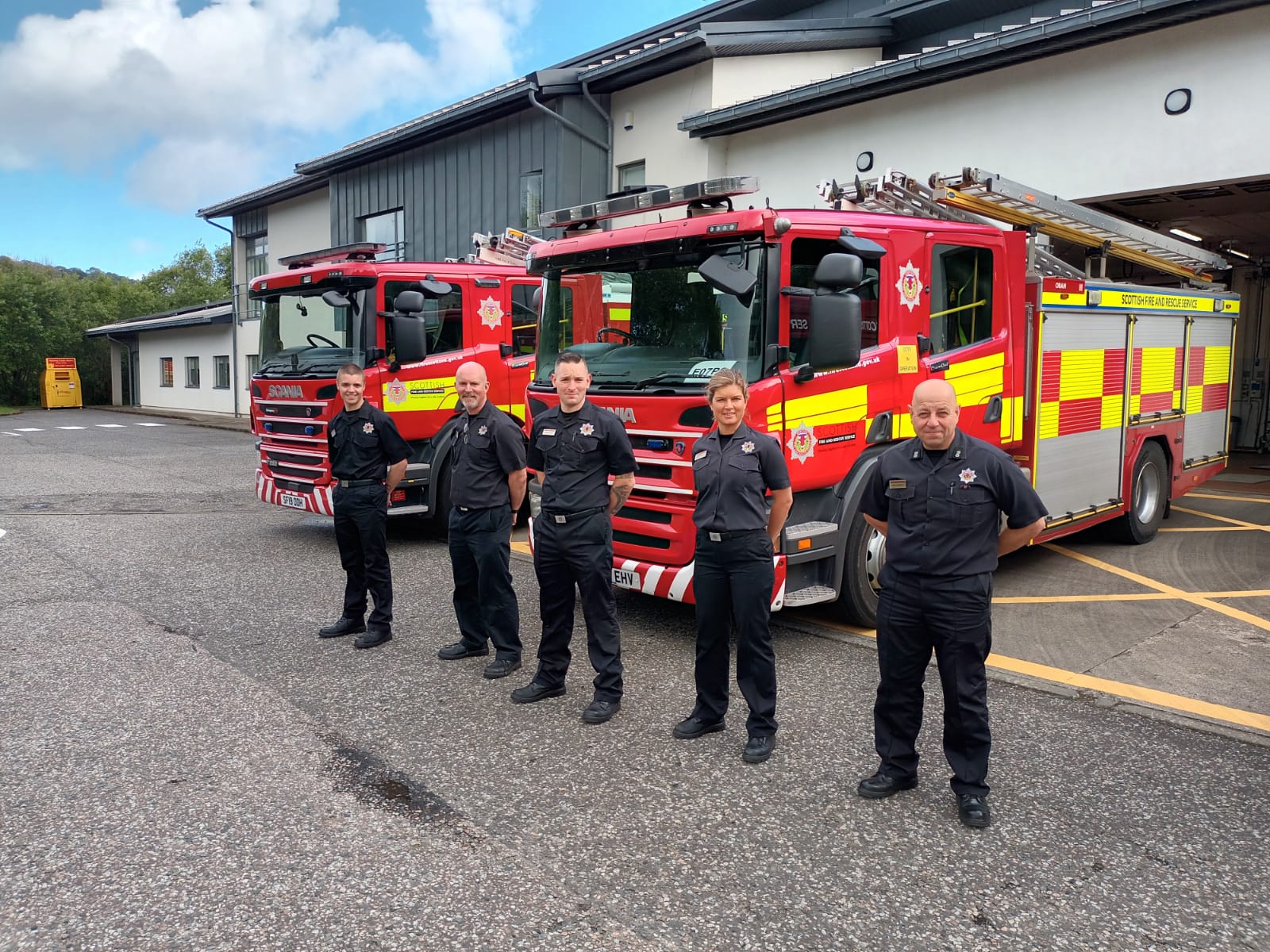 19th
It was time to head to Fort William and find the entrance to the canals. There was a good wind, so I was happy to use the sail again. I had been hoping to spot Ben Nevis, but unfortunately thick mist obscured it from my view.
The water was very dark and there were lots of steep, tall waves. Maneuvering the kayak required a lot of concentration, constant the correcting and steering made it tiring. Steering involved twisting you body fully and engaging your core muscles. The rudder was almost constantly jammed by sand. To try and avoid too much discomfort, I tried to alternate the side that the sail was on, so I wasn’t always sat twisted on one side.
When I got to Corran, there was a massive restriction because of the land narrowing. As I got nearer, the waves became choppy and quite rough, it was almost like being in surf. There was even a ferry darting back and forth across the gap. My favourite activity is trying to dodge those…
Towards the evening I got clos to Fort William! At this point I decided it was best to camp and work out the canals in the morning. I’d been told you could get a key from the canal’s trust, providing access to toilet blocks, but the staff seemed to have left. Hard luck.
I found a beach, so quickly got my tent up and shoved my balaclava on. The midgies were swarming, but I found that it was always best to stay on the beach in the wind to cook and eat as it blows the buggers away. Once I had eaten, I got into the tent and zipped in. Night night.