Isle of Man to Northern Ireland

Prior to this crossing, I woke up in my tent at Port St Mary to a fairly windy bay, I double checked all the forecasts. In terms of wind there was to be a West going SW 4 to 6 occasionally 7, in other words – not good. But I’d paddled in these conditions from Carbis Bay to Newquay with large ground sea (swells) and had coped well. The SW wind would be on the beam (sideways on) but would also hopefully give me a little push.

If there had been an accessible campsite on the Isle of Man that I could have moved to, I would have been tempted to stay. However this wasn’t the case and I felt if I was to camp another night there, with no proper beach or access to fresh water, I’d probably lose moral and end up looking for a ferry home. The forecast for the next 7 days was awful and I didn’t want to end up stuck.

I decided to poke my nose out to the Northside to check on conditions and contemplate the crossing. If they were too bad, I’d have no choice but to head for a beach on the North of the island and hope I could hole up somewhere vaguely hospitable.

Before resorting to this it was worth a try, and I headed to the calf of the Man with a headwind and bumpy seas.  I passed inshore of the island and was nice to see some puffins, the sun even came out! It was a tough call, the sea was okay and I felt more positive, but there wasn’t a big safety margin to allow for unseen complications. A decision had to be made: with my lack of options on the Isle of Man; the weather front that was on its way in the next couple of days; and the sea conditions within my abilities I made the call to go for it. 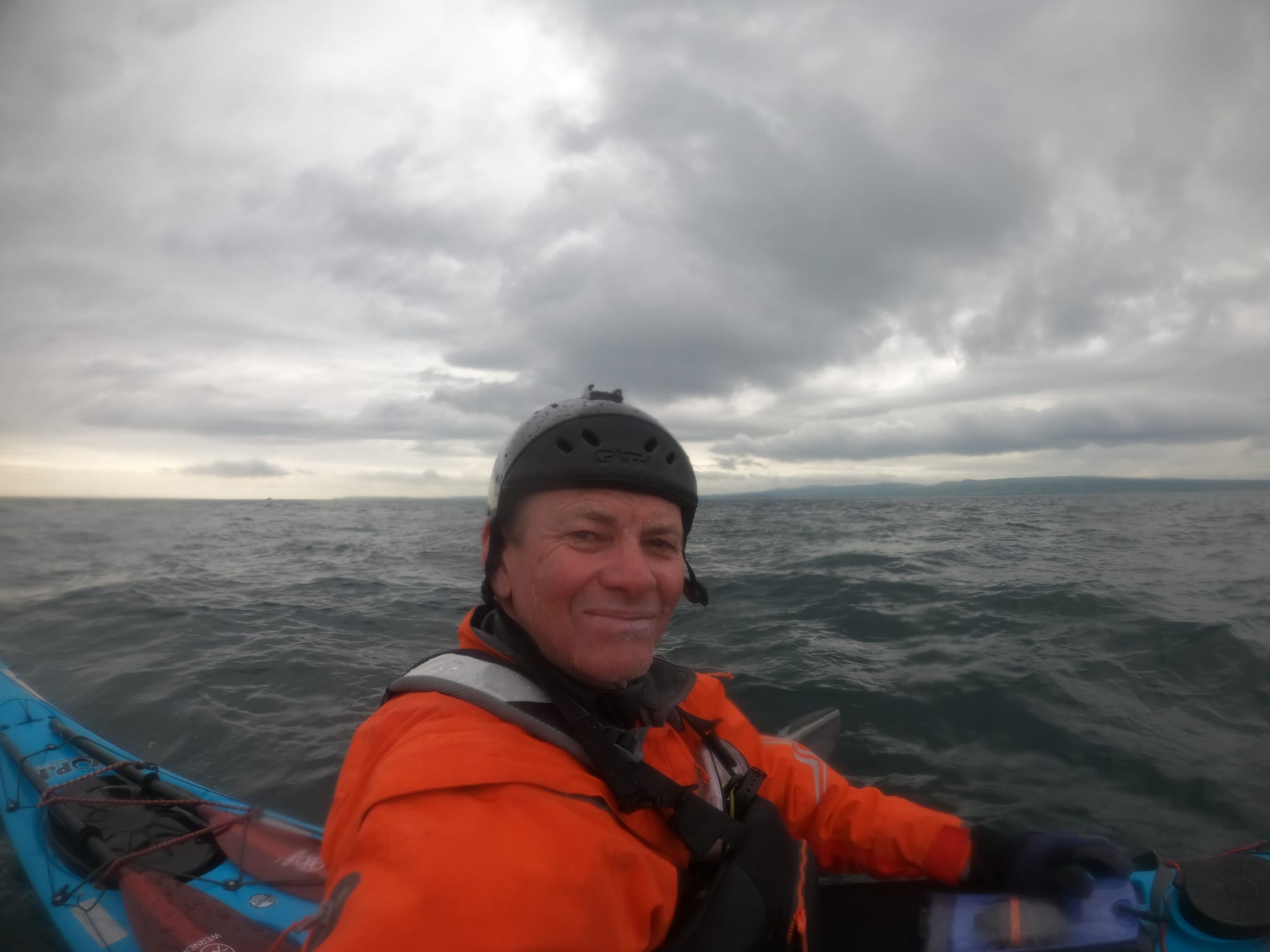 I corrected my course from a bearing of 319 to 300 to allow for the SW wind and set off… A few ships around kept me on my toes. But after an hour or two I could see mountains, instead of the flat coastline I expected however, I had to trust the bearings and continued.

About 3/4 of the way across I could make out more land, it was low-lying but not clear. What was slightly troubling was a big, dark bank of cloud was building over the land. It definitely looked like possible bad news.

Despite this, the sun was still out above me and as time went on I grew confident that I recognised the section of coast I wanted. I kept checking behind me to measure my transect, and noticing I was a bit North, I corrected to 295 to make sure I would be South of the land I wanted. I was pretty much just beam onto the waves. I planned to get slightly south of Ardglass, turn and run up the shore with the waves behind me, and look for a good bay to camp. It seemed do-able!

I started to see four headlands all starting to line up almost in a North transect. I reckoned I was 5 miles off and still had about 6 hours of daylight left. I remember thinking at this rate I could even find time to watch a movie tonight! 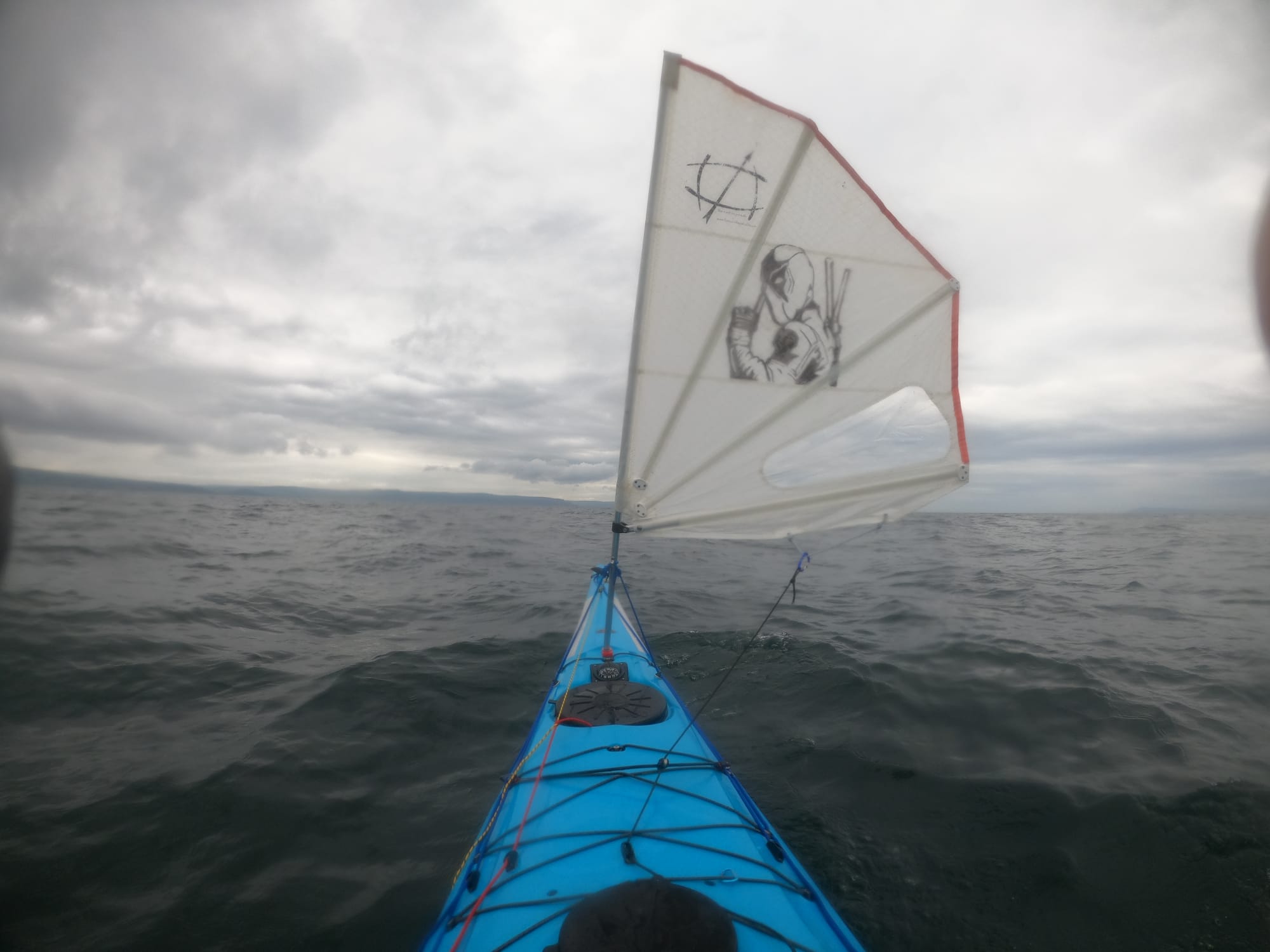 That was when the sun suddenly disappeared. All at once the cloud bank seemed to deepen and appeared much more threatening. The land I’d been looking at became hidden by cloud and the wind noticeably strengthened and turned more to the West. Rather than rolling over and along the waves I was now going into them against the headwind. My forward progress became a struggle. I paddled head on, attempting to turn a little to get a bit of a wave push and momentum, then turned back into the waves.

Periodically the cloud lifted and I could see the four headlands no longer lined up. During one of these breaks I realised I was definitely starting to get pushed to the East by the wind and I decided on a big effort to paddle due West. After pumping the boat dry and eating some energy bars, I set to work, hoping I was still on track for one of the four bays.

An hour later of constant cloud, I got another glimpse of land. Somehow I didn’t appear to be any nearer and the first two bays were too far west now, unreachable. No option to give up… so more energy bars and re-aiming for Bay three and four, crabbing sideways.

… Another half an hour and I realised with dread that 3 and 4 were really West, only reachable by a direct paddle into the headwind. The trouble was that my heavy, fully loaded boat could hardly make progress and the extra wind was still Westerly. Perhaps I could hold position and wait for this local wind to blow out? With few options I wanted to try one last time, so more energy bars and double effort it was.

A last look at land through cloud revealed that Bay 4 was now well to the West and beyond it I could only see sea. I’m going North East and out to sea too fast, even if the storm was to blow out I was already too far out to sea to make another direct paddle to land. It was hard to comprehend my current situation and understand how it had all gone wrong so quickly. No energy to make it to land (even with the consumption of even more energy bars), no option to go back the way I’d come and the sun would setting soon.

reaching out for help

I reached for my VHF…. but felt filled with frustration and embarrassment. I couldn’t stop thinking that there must be a way to solve this that I hadn’t thought of. I always got myself out of these things. Jokes aside maybe I could have more energy bars and make just one more try for land?

I knew logically this was stupid and had a stern word with myself. As a firefighter of 22 years, I knew I had a rescue window – whilst I am still thinking clearly, not dangerously tired, and still have light. The more time I spent dithering, or attempting uselessly to get to land, the less time the rescue crews would have to mobilise, find my location and help me.

I picked up the VHF and called mayday.

Belfast coastguard came back loud and clear. “What is you position? Where were you heading? Where have you come from?” … I’d learnt the topography, but not the names. Oh dear. Time to activate the personal locator beacon! 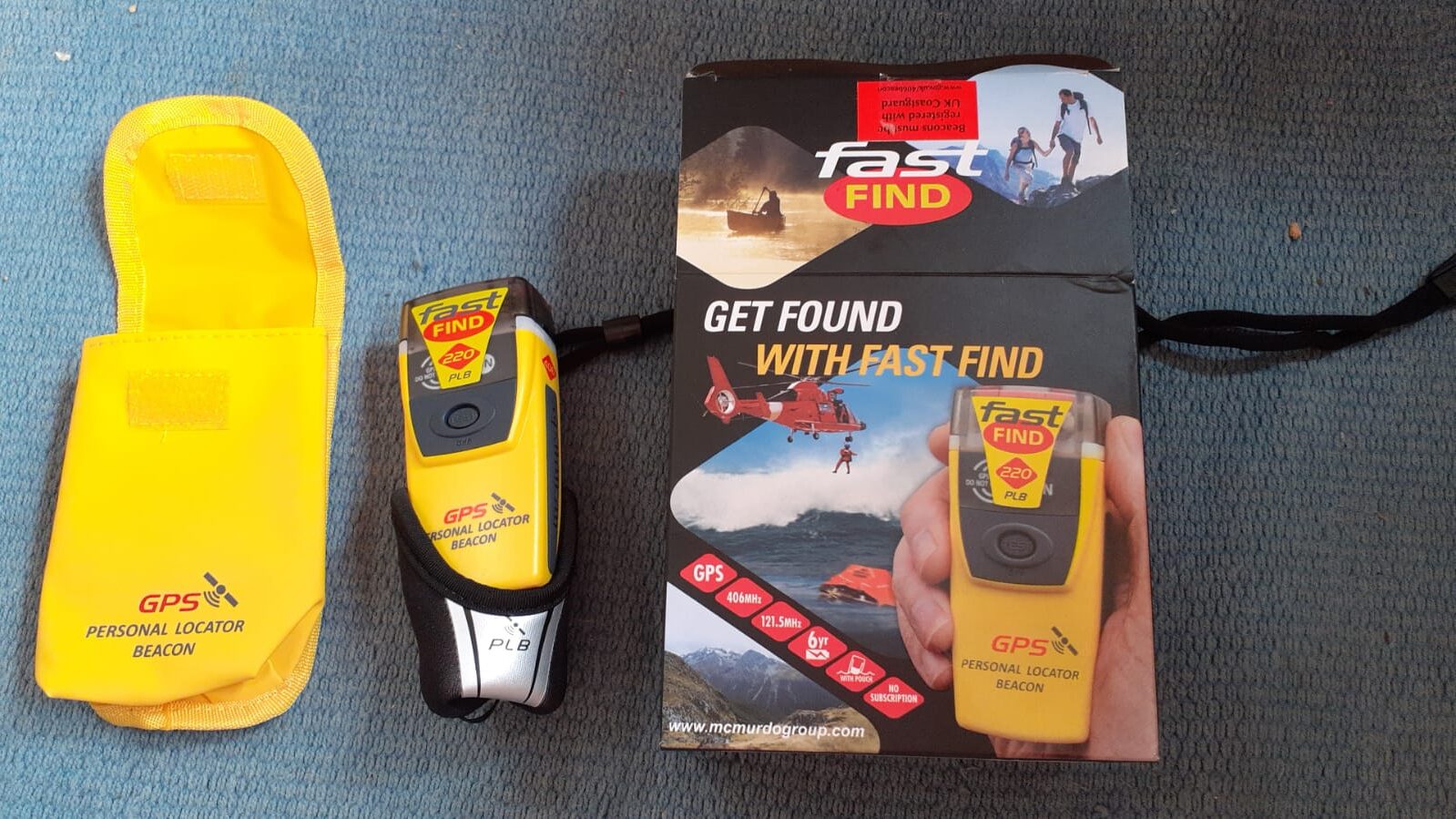 5 mins later and Belfast put out my location to all shipping. My only job now was to keep energy up, stay afloat and definitely not capsize – easier said than done after a tough day of paddling.

Behind me the cloud lifted and I could suddenly see a Scottish island. Bloody hell, I couldn’t believe how far I was drifting. Maybe I should head for it? I turned and started paddling with the waves at warp speed. A few minutes in I stopped and had a word with myself, I was panicking and making a risky decision due to this, I needed to take a breath and have belief in myself and my decision making so far, it would be dark soon and holding position was what I needed to do.

Some time later I look behind me and there’s a big Stena ferry close by, they’ve diverted and are marking my location. Belfast tell me 15 mins until the lifeboat gets to me.

I waited with my head torch on and strobe on, focusing on staying upright. Belfast asked me to keep a count down on the VHF as the lifeboat was using a direction finder on my signal.

Finally, I spotted them and radioed my bearing. I was picked up by the Portaferry rib and then transferred to the all weather Shannon class. It took us 25 minutes at top speed to reach land (a slight change to my usual speed to say the least). It turned out I had ended up 14 miles off east of Portaferry. It was hard to believe that in just an hour and a half I’d gone 15 miles backwards. How?

I mainly recall being sat on the boat, with mixed feelings of relief but also strong embarrassment and disappointment. The crews were brilliant, telling me”it’s what they do” and “it happens”, not to feel bad … All things I have said countless times in 22 years in the fire service. They had feared the worst, which I genuinely felt bad about. Situations with kayakers in difficulties haven’t always gone well, especially not lone ones, 14 miles off, in high-winds. They said my early decision to get help, having a fully charged VHF, PLB (personal locator beacon), full dry suit etc, all helped to save my life. 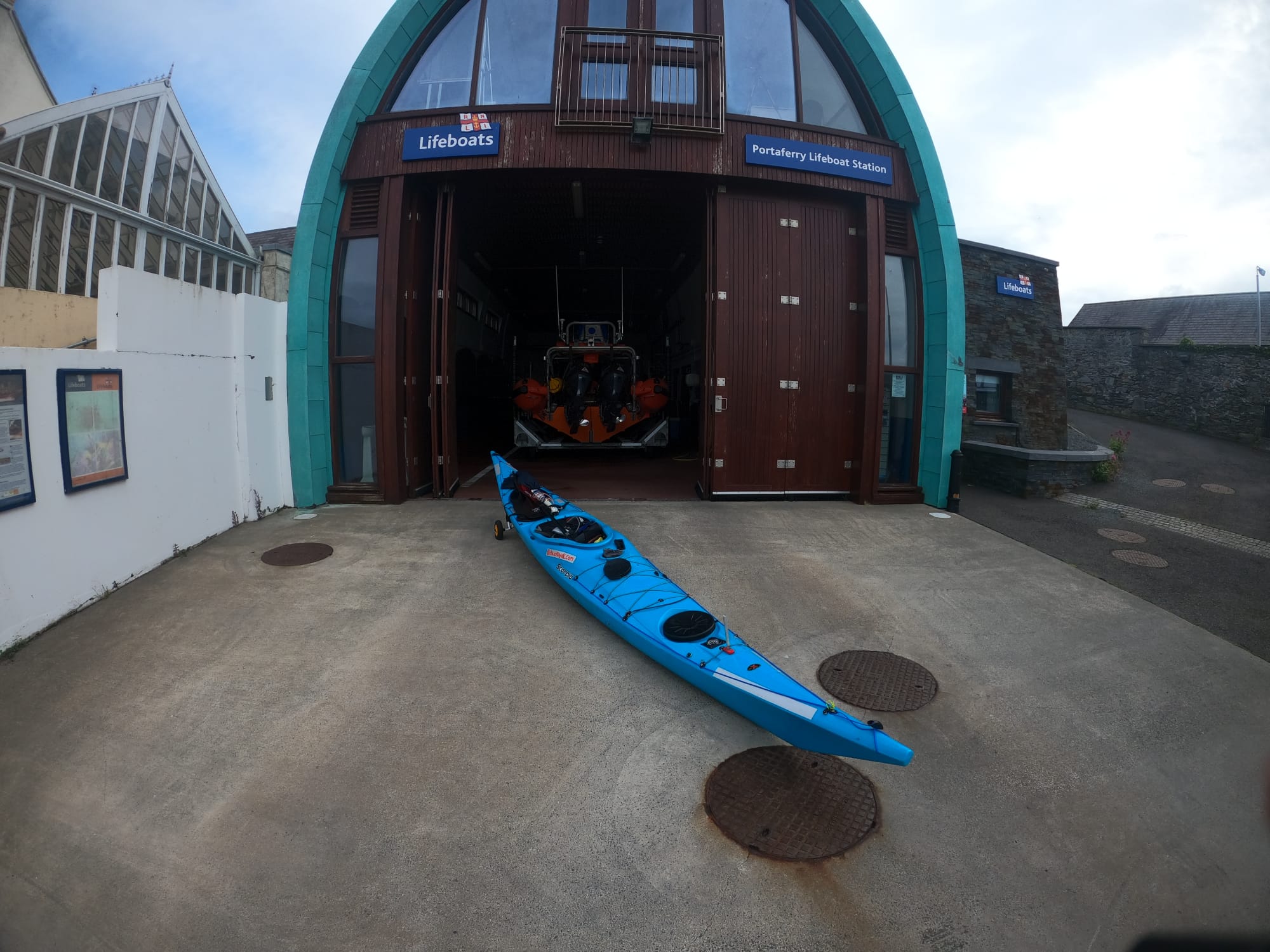 So far the pressure of this trip and the unpredictable ever-changing weather has involved a lot of difficult decisions. Most have worked out, but not this time. I am acutely aware that everyone has a duty to avoid getting themselves into these types of situations. But I also know that it’s not always possible and we can all make decisions with the feelings and information we have at the time which turn out to be bad calls, even with good intentions.

If I could pass on any advice of what I learned from this awful situation:

For the kayakers – it would definitely be too always take a VHF and a PLB. Many don’t, and their stories do not have the happy ending that mine does. Please be prepared, even if you’re confident and skilled at what you do. Always better safe than sorry.

And for everyone -the meaning of this trip has always been to compare the experience and physical struggles to a mental health journey. An important thing to acknowledge is that sometimes you just have to ask for help. And people will. They may even put you up for the night, wash you clothes or go out 14 miles in a boat to rescue you.

Sadly if you don’t ask, and ask early, your problems can possibly only get worse. Your rescue window can close. Whether you’re caught in a storm of weather or feelings of mental despair, make that call early.

(Post to follow recognising some lovely folks who have looked out for me recently, making it possible to carry on.)