After the rescue of last night, it was time for a rest. I needed to regroup, recover and consider if I should carry on. I was full of questions: was I unlucky? Was it a lack of experience or the  equipment? Was the pressure of dealing with constant bad weather putting me at too great a risk? All important things to think about. The main question of course, was what would I do differently if I was to continue?

I met regularly with a Dave, a member of the Portaferry life boat crew- also a keen sea kayaker. And out of the blue, Barry and Claire, local sea kayaker got in touch.

After a few days of soul searching and resting, I made the decision to carry on. The main obstacle ahead would be crossing back across to the Mull of kintyre. An open crossing. I felt unsure that my nerve would hold after the recent scare. The idea of paddling across the open sea with no land close-by wasn’t a pleasant one. But my mind was made up and I knew I had it in me! 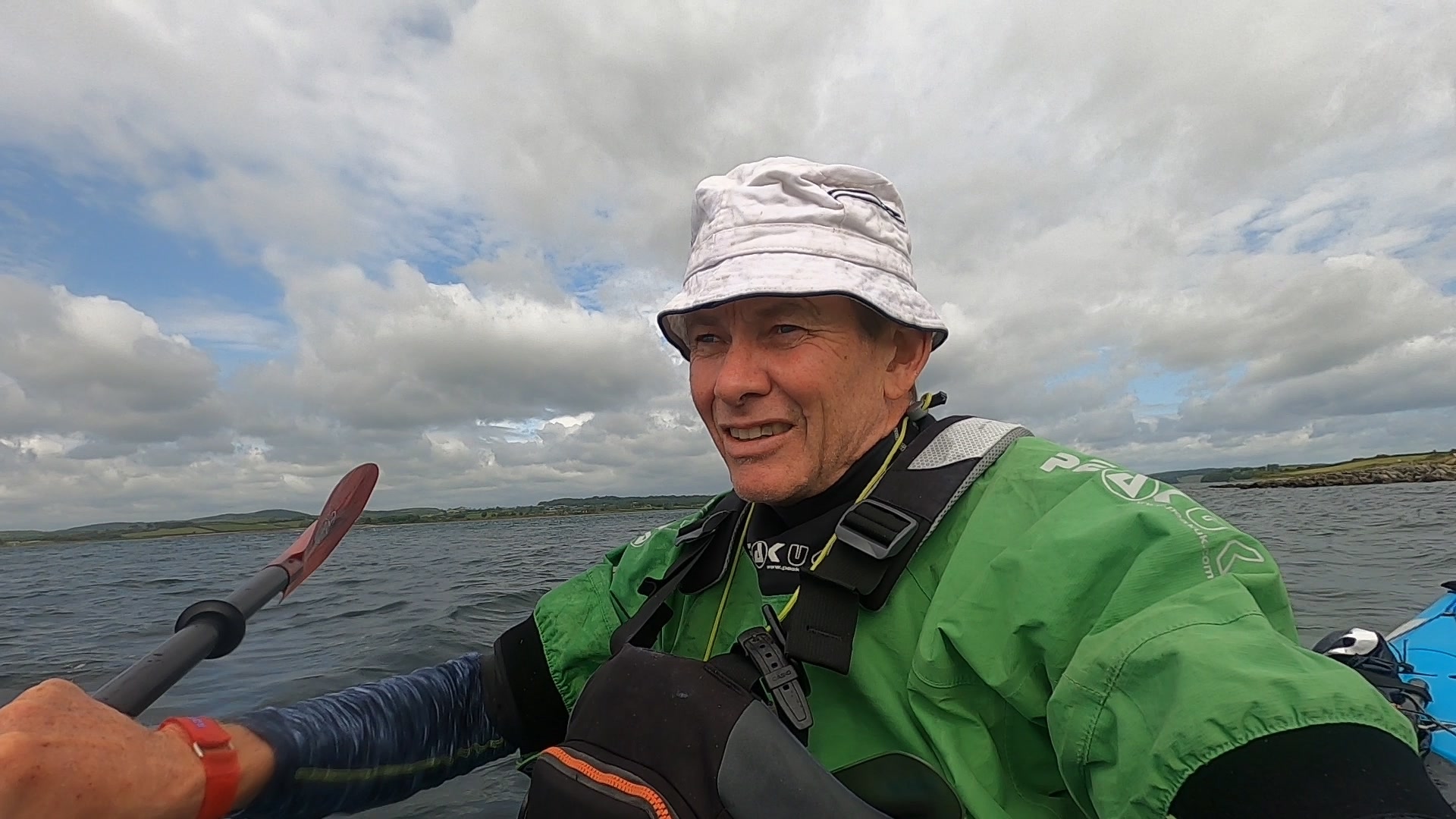 The weather had (mostly) improved from the storm and it was time to move on from my comfortable Irish B’n’b!

Firstly, I tackled getting out of strangford lough and it’s notorious currents. A good warm up for my arms. Then my route was along the coast. Lovely clear water and marine life, lots of seals on the rocks. 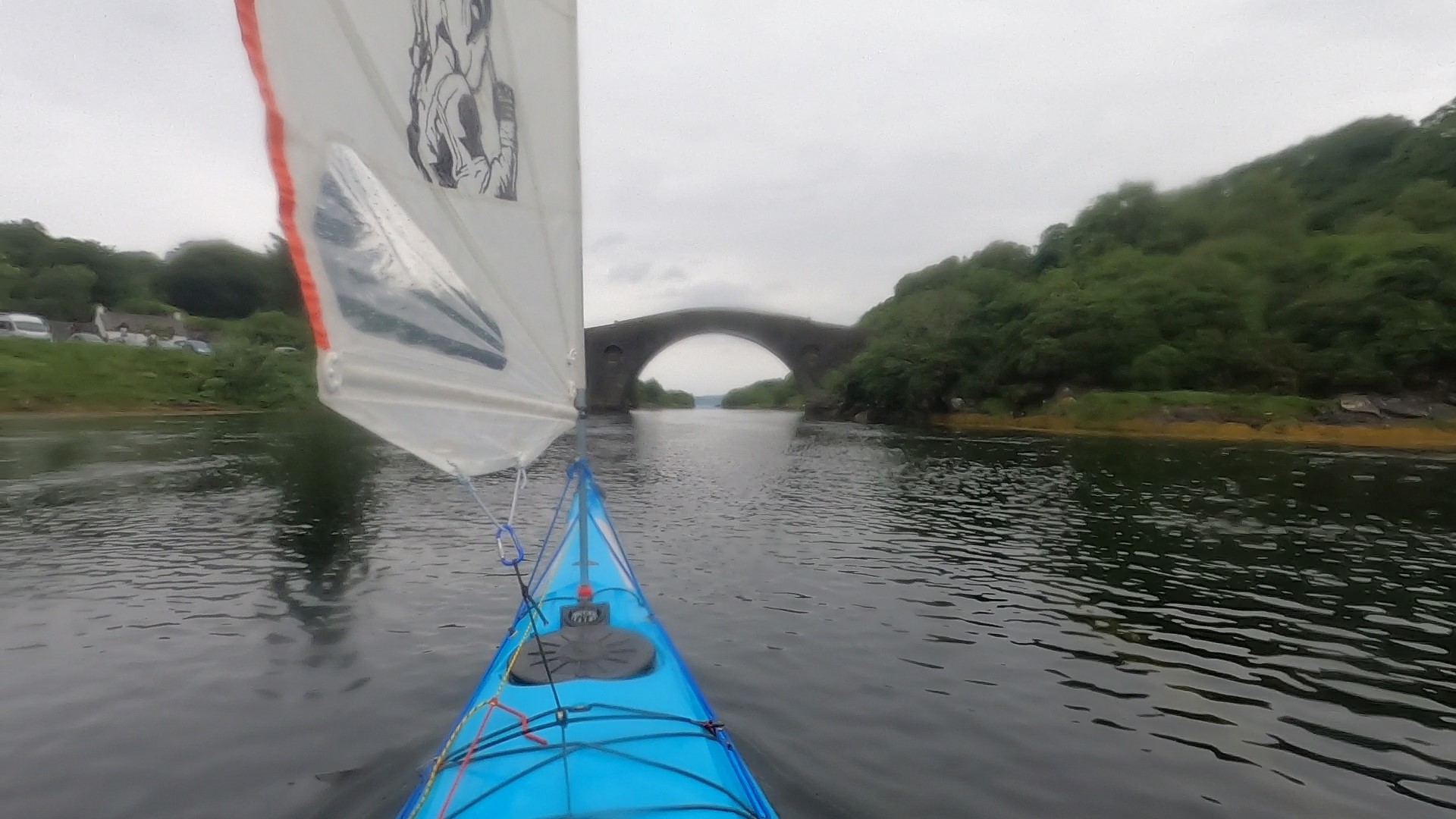 I was a little nervous but also glad to be underway. It was a day of mixed wind, which I quickly found frustrating.  Acting with extra caution now, I decided that rather than battle headwinds and feel demoralised and tired, I’d stop early. The forecast looked better the next day, and so I set up my tent and planned to rise with the larks.

Right on cue, the rain started and I enjoyed another wet night camping. Can’t say I’d missed that.

Good to be back. 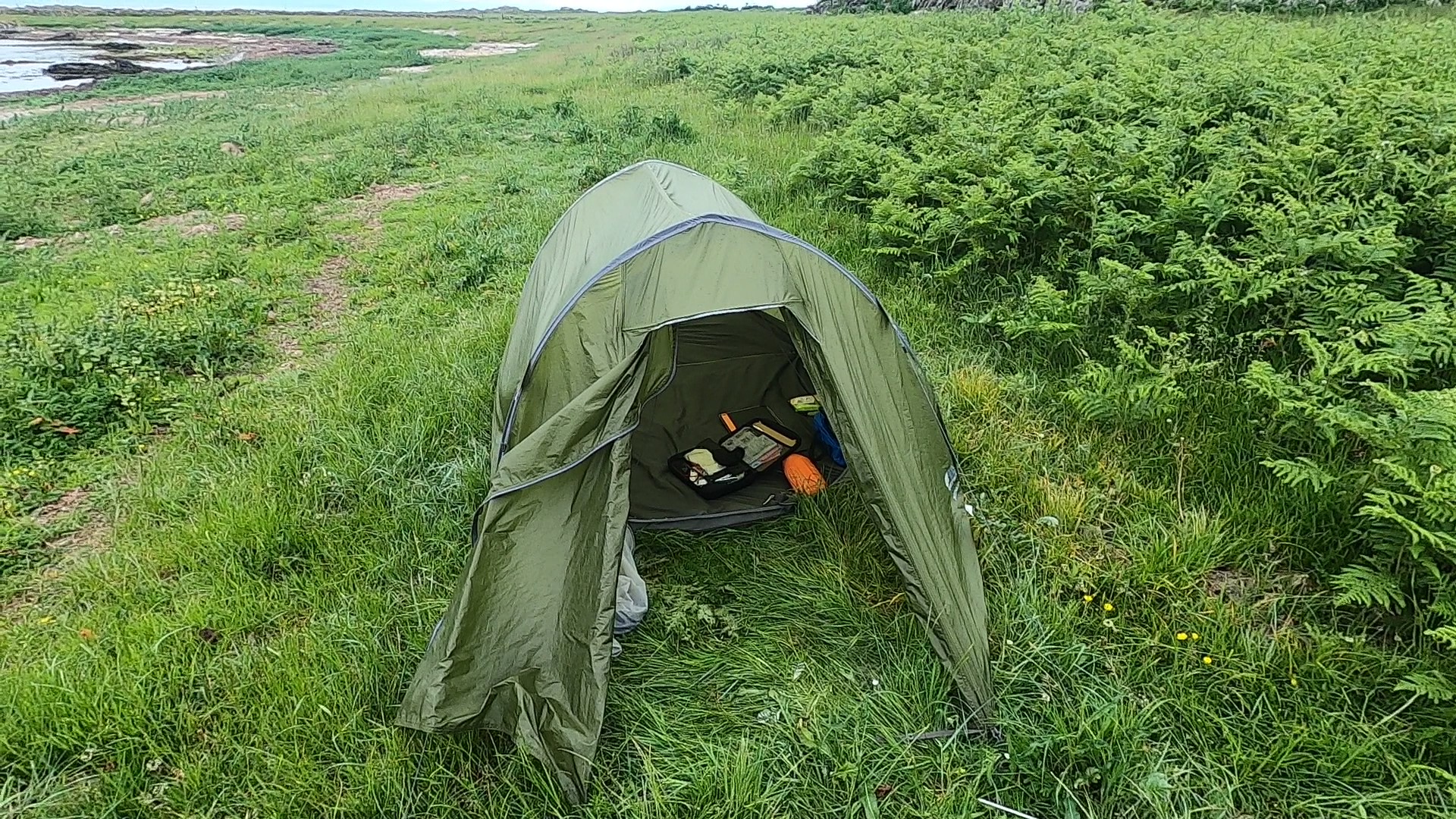 A rainy night unfortunately meant starting with wet kit. Anyone else familiar with the horrible feeling of surfing two days in a row and having to squeeze on a damp wetsuit in the morning…?

I had to cross Belfast sound that day, so I made an early start. I noticed I was getting worryingly short of water and methylated spirit so needed to stop and get some. Thankfully I was able to find a small spar and they had some. I felt my spirits go up. It was time to cross! Wind waves in a good direction.

Half way over, I became aware of two ferries heading my way. The nearest one seemed a bit too close for comfort. As it got in front of me it stopped and started drifting. Confused, I put my radio on but no calls. Guess I was going to have to cross in front of it. Just as I concluded this,  a third ferry appeared to my right, this time heading straight at me! I picked up the pace, but it was still getting nearer. Crickey it was fast. A nervous 10 mins later it changed course. Phew. A bit of a close one to keep me on my toes! Despite my website being called ‘big blue kayak’… It was a reminder of how small I am in comparison to others on the sea…

Some time later, I reached the other side and could see huge cliffs, covered in sea birds.  There are metal walk ways connecting the shear cliffs. Impressive. 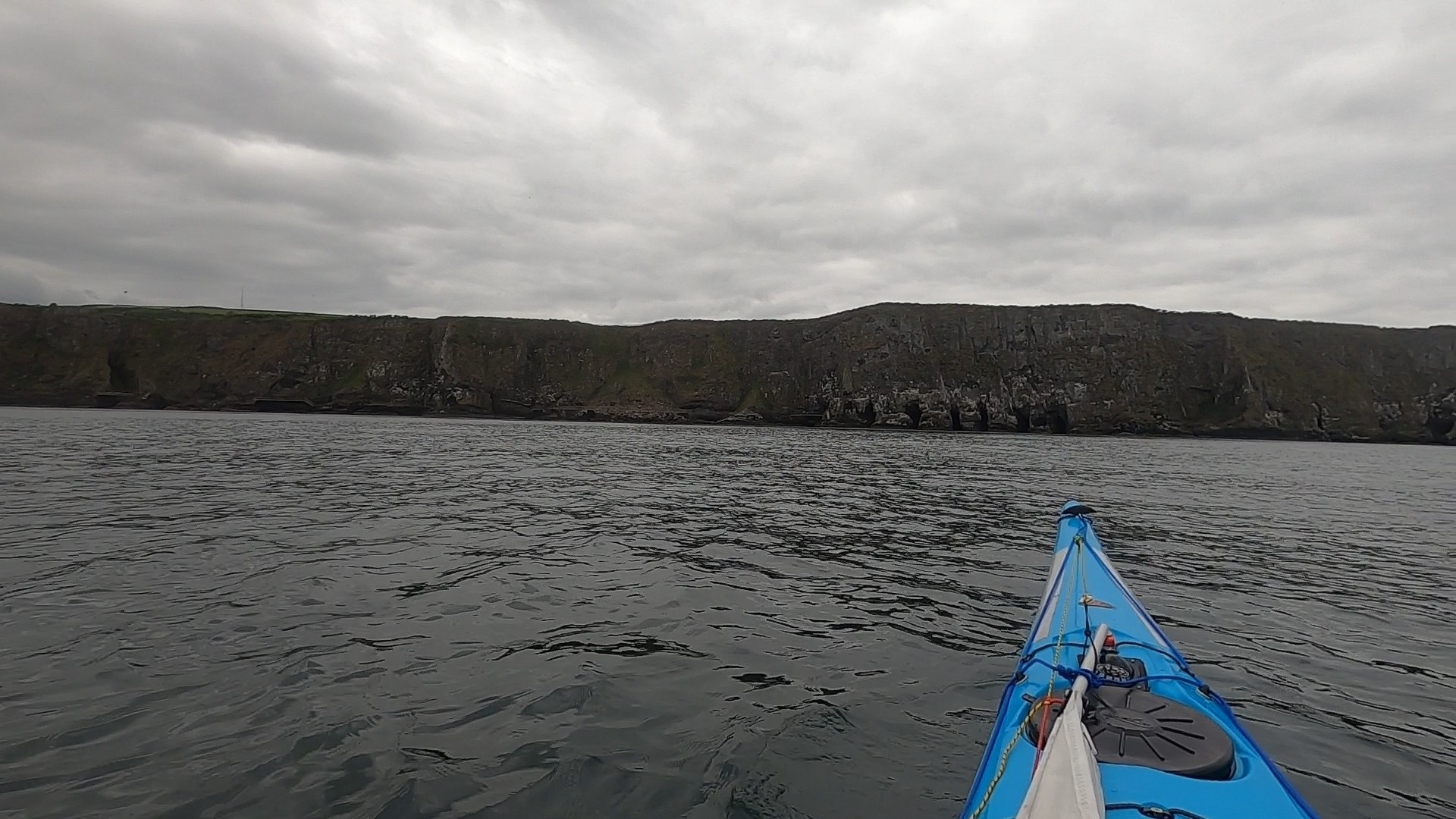 Pulling into Larne, I saw a ferry docked. Minutes later it turned around left the port and coming at me. Not again. Another frantic paddle to get to shore.

Other end of the bay, I was pleased to find a slipway and a rowing club. That means water and a tap! What treats.

Tents up. Quick meal. And off to bed! Another early start planned tomorrow

Larne to Mull of Kintyre
A big day was ahead of me.  I needed to choose the route early, two options: run up the coast and then cross, this possibly could 2 days or go direct and use the tides more.
The wind was behind! Hoping that the tailwind on the sail could really blast me over, I decided to go direct. 25 miles open crossing, here I come. Plus I have to find a safe beach when I get there. A 35 mile day without problems.
I set off at 5am and enjoyed watching the sunrise. 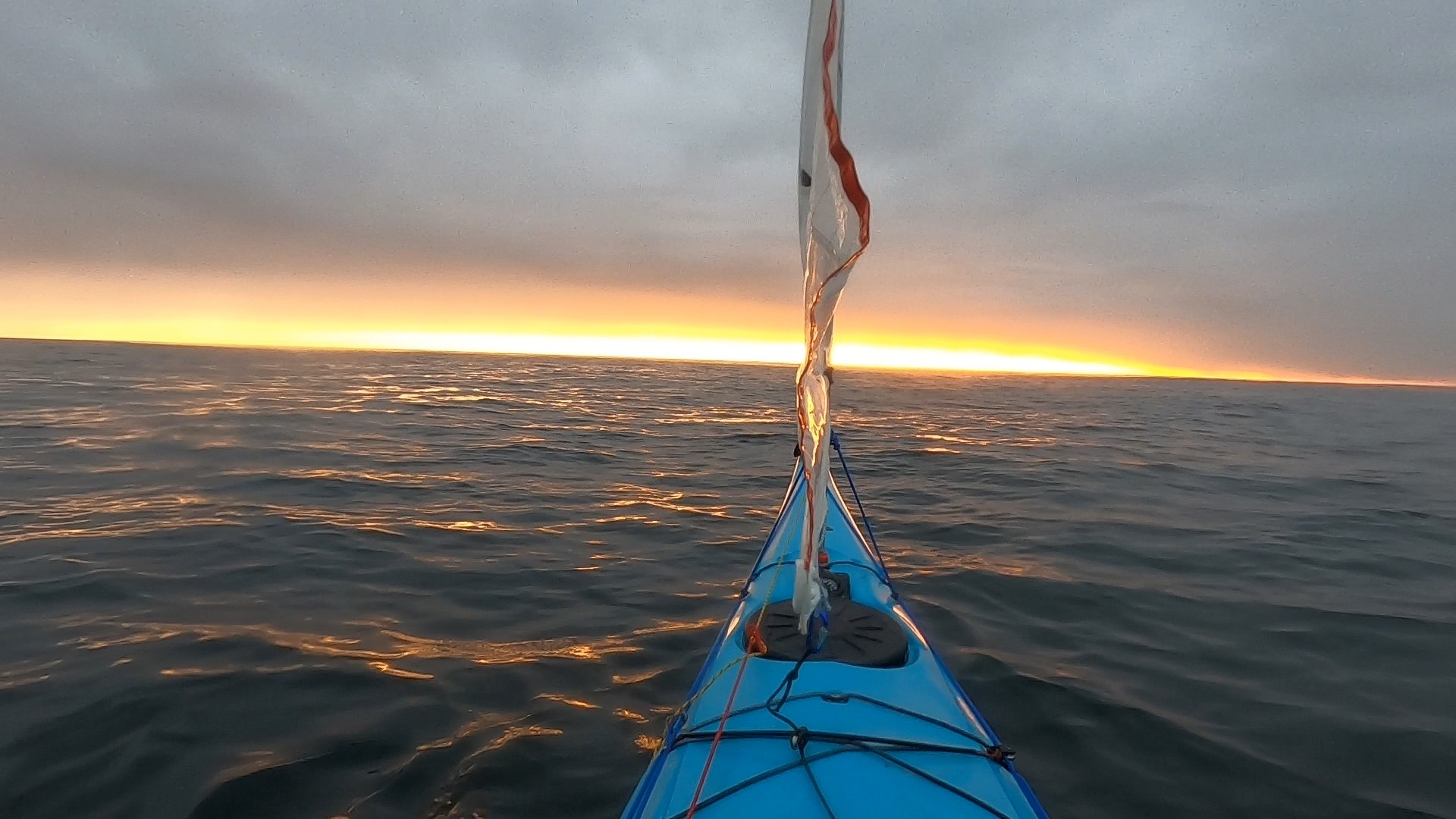 …An hour in, the wind drops. Bummer. Looks like it’s 35 miles of paddling only.
Fast-forward 5 hours and I was excited to see the Mull of Kintyre light house. According to my forecast, there should be a 4 knot current heading up the coast. Instead, it’s pushing North, not what I’d hoped at all. I was starting to get a feeling of dejavu.
Time to paddle hard. There are big boils and Eddie’s. Paddle harder. Slowly but surely I made gains to land and a nervous hour later I can see the small beach I want. There seems to be a yacht on the beach.
Closer to the beach I could see quite big surf. Bugger. I felt too tired to go further and find an alternative camp spot. Quick decision.  I didn’t know when the next beach will be.
I waited for a small set of waves and seized the opportunity to come in close to the rocks and away from the main surf.
My guess of a yacht is confirmed… except now I also saw a cross and grave. I had bit of a bad feeling, but I wasn’t overwhelmed with options, so an hour later and the tent is up. Unfortunately, so are the midges.
The surf gradually closed out the bay until there were 6ft tubing waves crashing across the whole shore. No way I was getting past them anytime soon!
All night I listened to the rain and the crashing waves, fingers crossed for tomorrow. 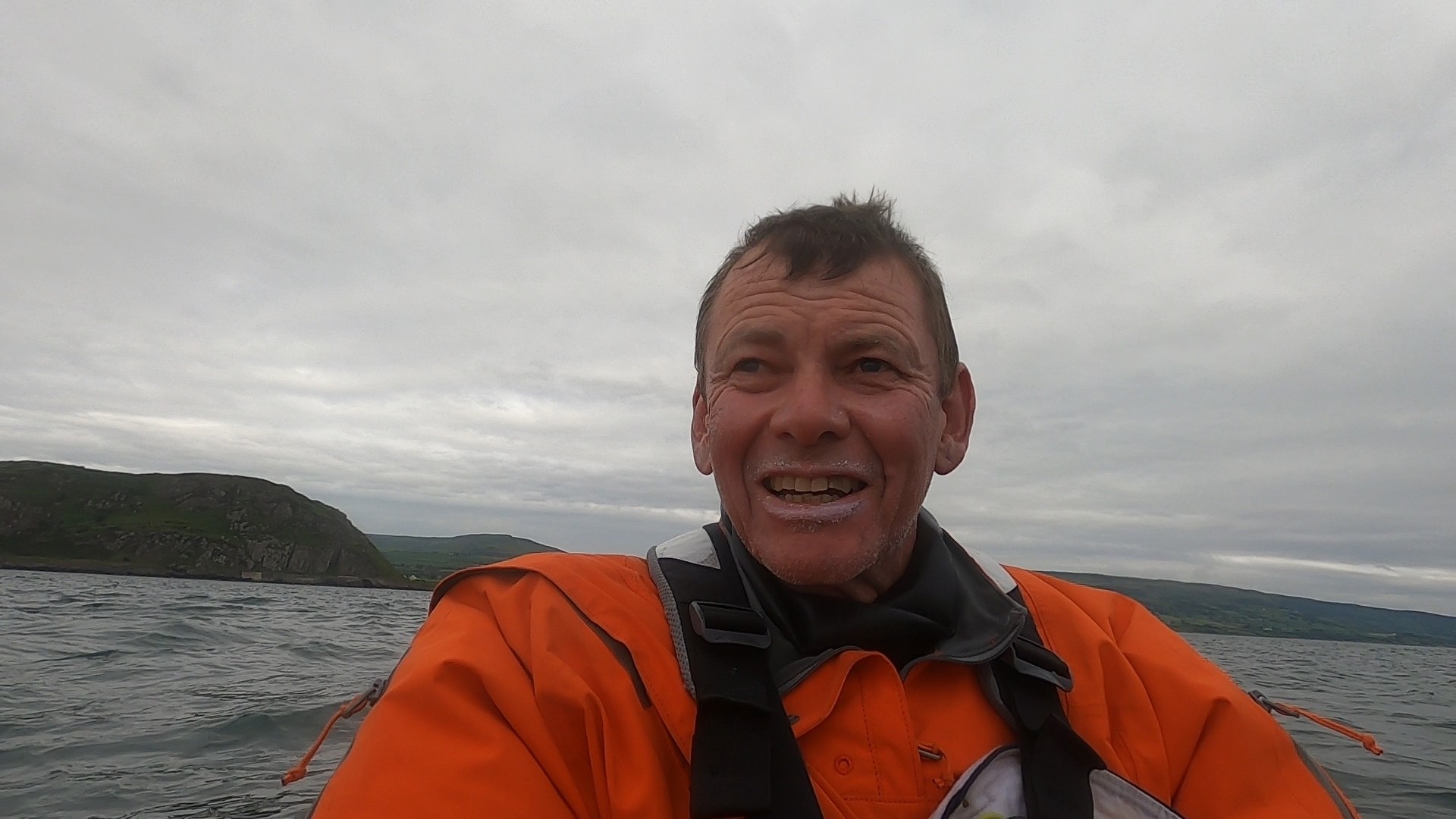 The next challenge : Reaching Scotland + A special day for me = 17th June!