The weather had finally improved! Anthony, the manager of Kennexstone Camping, kindly took me down to Port Eynon. The tides were going to be a struggle but I couldn’t choose the time (beggars can’t be choosers, as they say).

I set off to Worms Head, reluctant to be paddling away from the warm caravan. After a slow start, I made it out in whitefish Bay with reasonable weather, only a bit of a head wind.

Tenby looked long way off and it was a slog against the tide. I was tempted to stop for maple buns but had to eat on the go or drift backwards.

In total, it took about 12hrs and to be honest, it was a demoralising day. It was hard to keep my spirits high when paddling was so hard and it felt like I was hardly moving forwards.

I landed Tenby about 7pm and found small camp in dunes. Here I was able to dry my clothes and enjoyed 2 meals in an attempt to up the calories. Shattered and knowing I had an early start, I fell asleep quickly.

Up and packed by 8:30, this usually takes an hour. At the last moment, I quickly checked in with the coastguard – only to find out that the Manorbier firing range was live from 9 to 5pm. If I didn’t get through, I would be stuck all day. I called on VHF, and was informed that they had laser guided bombs scheduled, but I was given a possible chance, and ‘permission to proceed at haste’. With the added motivation of avoiding-being-blown-up, I got going and cleared the range. Phew. 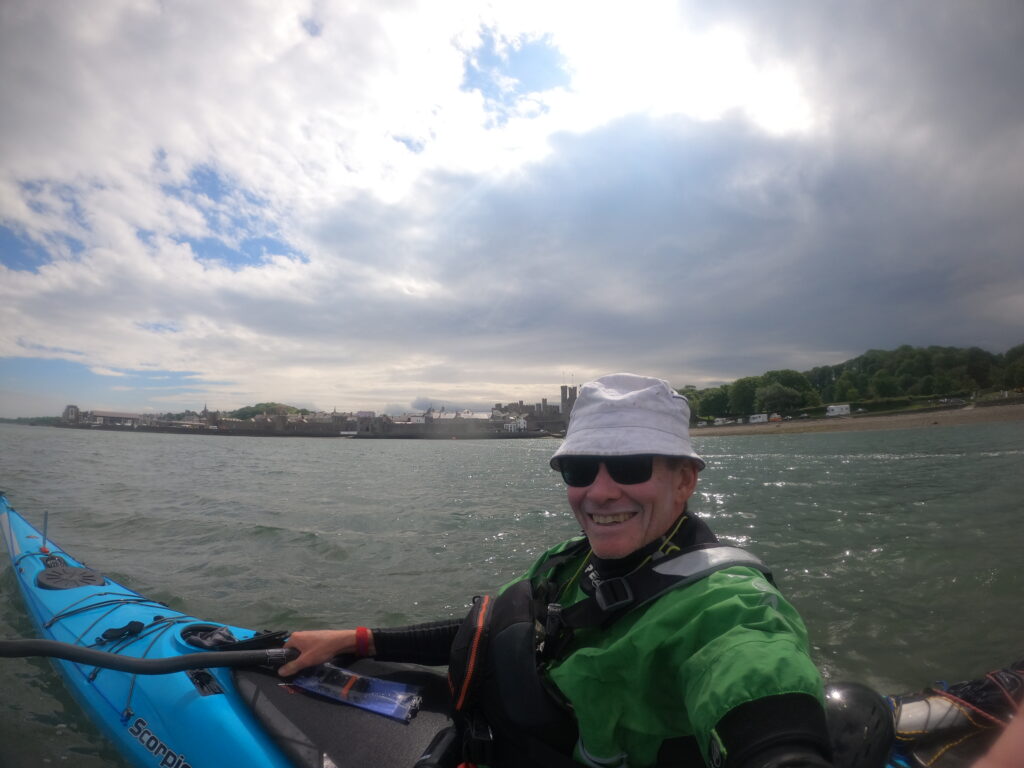 The rest of the morning was the best so far. I saw thousands of sea birds, 2 porpoises, seals and  amazing cliffs with lots of climbers.

By mid-day the wind picked up, which wasn’t expected by forecast, and I had to make a big effort to get to Freshwater. Views of skomer in the distance.

Another camp in the dunes with 2 x meals. Early night 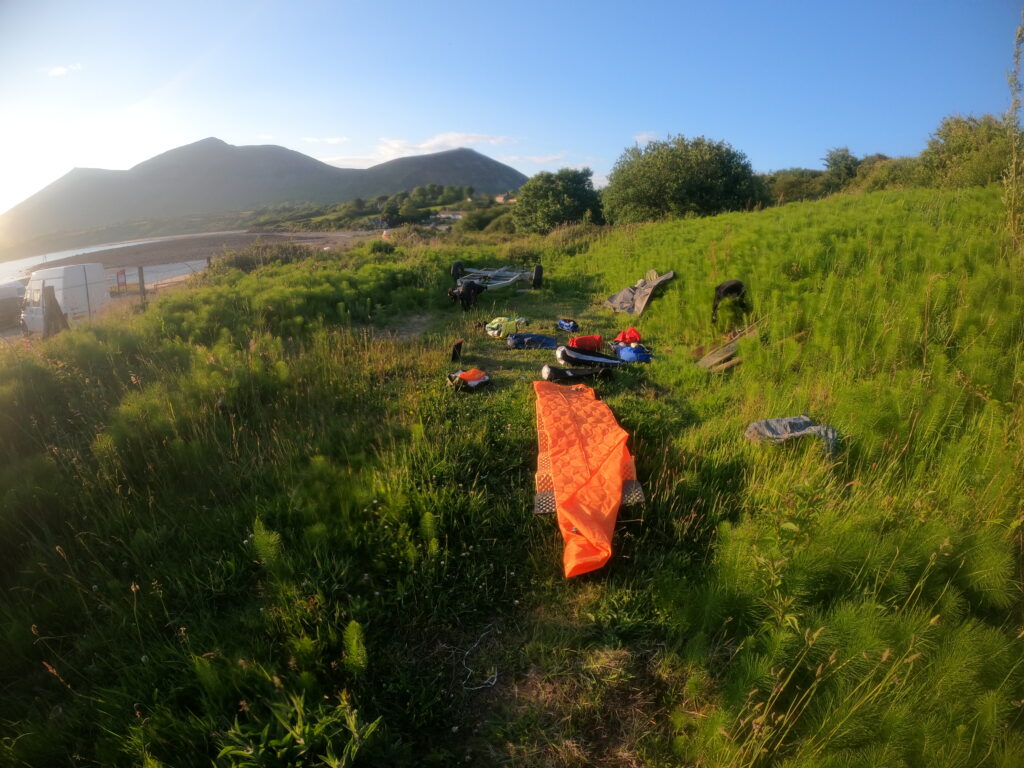 3am wake up 4.30 start with head torch! The mission of the day was to get across Milford Haven, past Skomer island and to Ramsay sound by 10am when the tide turns. There is a 6 knot current, so if I didn’t make it, I’d be stuck until 6pm waiting for the tide to turn again.

Tide just turned before I’d arrived, so a hard paddle to get through. My mood was significantly boosted by a sighting of two bottlenose dolphins feeding – mother and juvenile – and lots of puffins by Skomer with their sand eels in their beaks. A treat to see.

Strong winds picked up from the North so called it a day and took the afternoon to regroup and charge equipment courtesy of life guard club. Thanks again guys!

Once again, I had an early start to get tide north. Strong currents out on Whiteness. Bit of chop and race. Headed to Fishguard. 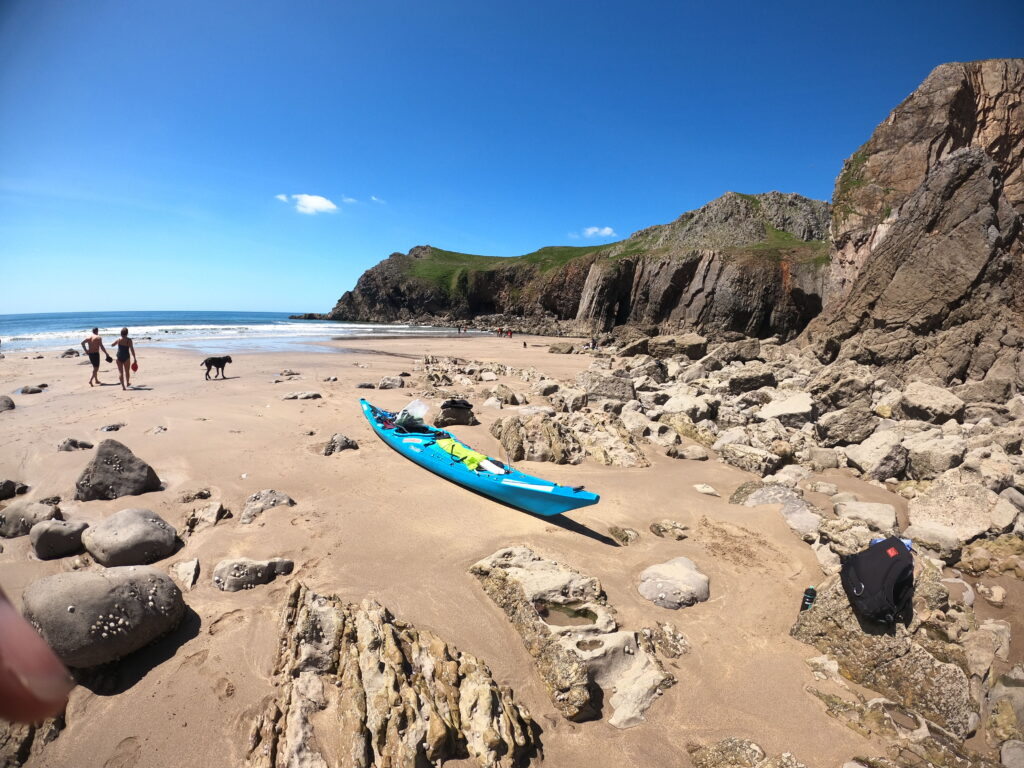 First common dolphin seen (bottlenose sightings on previous days). Moving fast with current on edge of race. Wasn’t too sure of location until ferry for Ireland appeared and reassured me.

Got to Cardigan and saw lovely beach and woods so stopped for night.

Set off with a reasonable wind from the West; ‘on the beam’ they call it. Sea a bit too choppy to spot any dolphins. Sighting of guillemots nesting on the cliffs as I passed close to Newquay headland made up for this!

Newquay rammed with tourists. Had to go to costcutter to top on pasta meals – I hadn’t rationed for 2 dinners a day, but definitely need them!

Hoping to get to Aberystwyth but there were no beaches after llanystud, just rugged cliffs. Finding my preferred spot of a usual beach and sand dune not possible as all beaches rocky. A campsite it was! Thankfully, the lovely owner offered a pitch and I had the luxury of a hot shower. This was especially great for my sore neck. 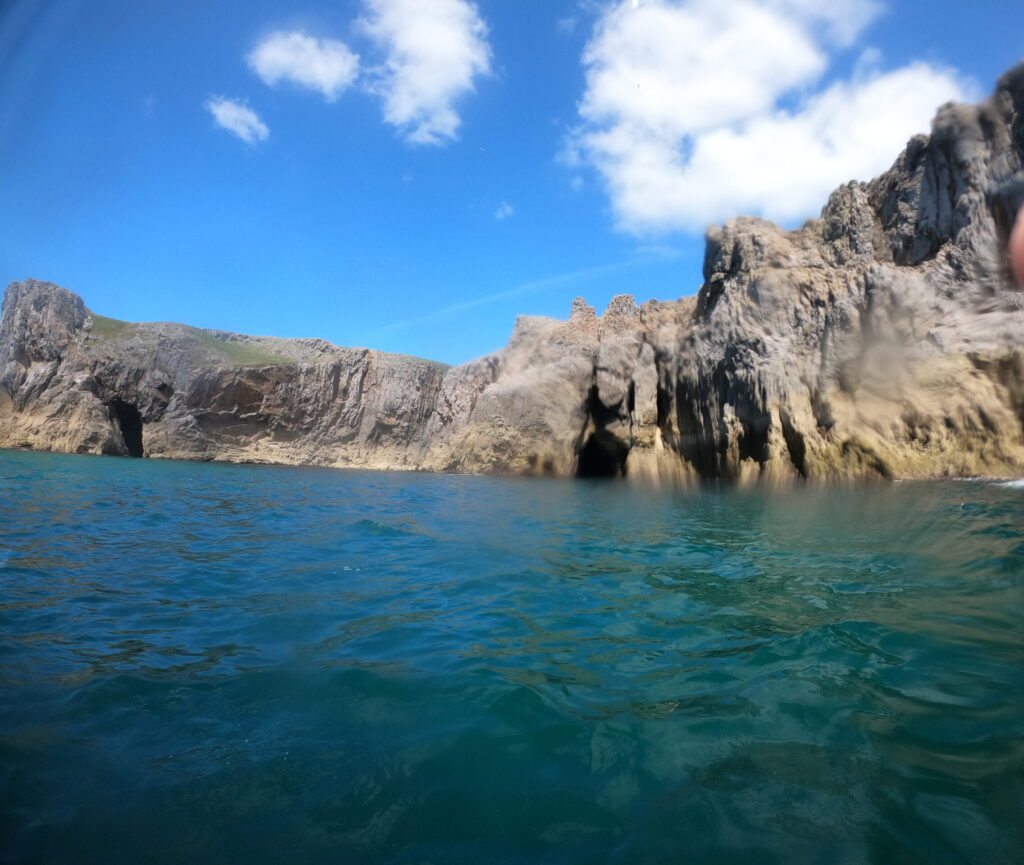 Rice for tea for a change and in bed as the rain started.

A bad forecast, rain, a sore neck and bad back, meant time for a rest. Frustratingly, the weather improved! Normally it gets worse than predicted.

I made the most of the day to fix rudder and re-rig the sail.

This was my first real flat day. The plan was to do 30 miles but was making real speed across the ground. After a rest day, I wanted to I make up the lost time and so headed for Bardsey Island. I think this was 50 miles. Spent the whole thing just hoping wind didn’t pick up!

Just North of Aberystwyth I saw a lone bottlenose; a large male with massive scarring. Normally the bottlenose are to the south of Newquay cardigan bay so this was a surprise. A few hours later saw 4 more large groups. One group came close which was brilliant.  Later on I also saw 2 Harbour porpoise, so a great day for wildlife.

Got to a beach near Bardsey about 7, tired but happy with progress. 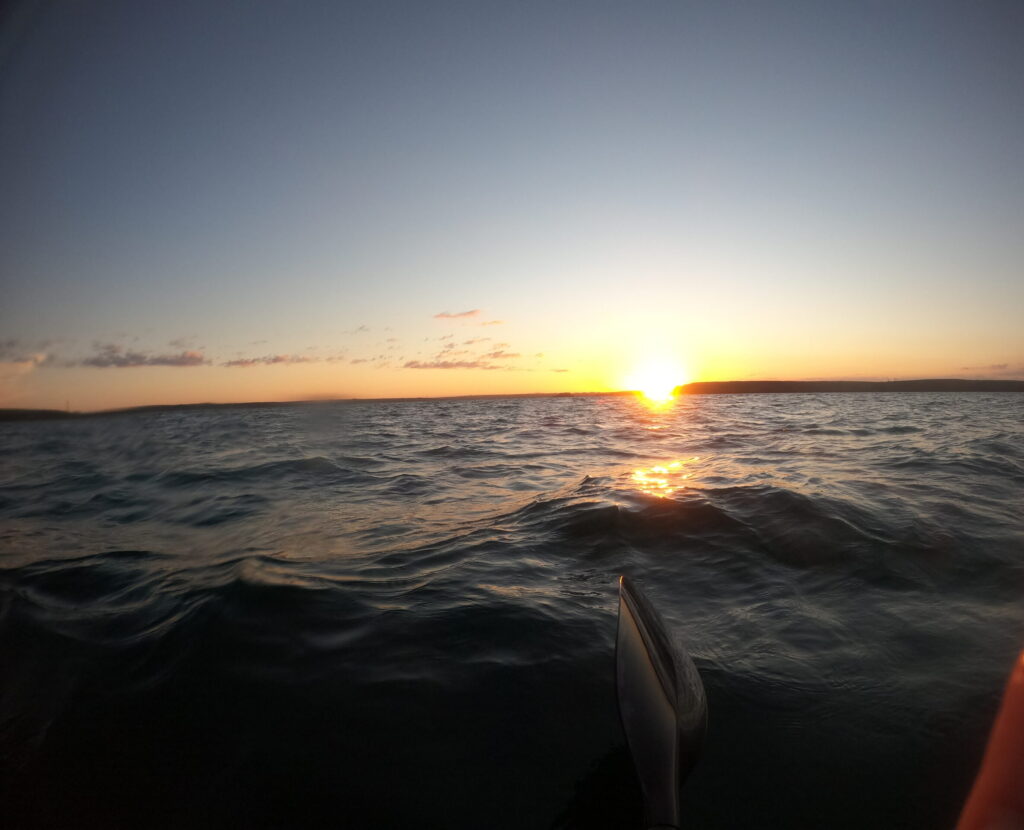 Set off early to get around Bardsey with the flood tide at 5:30 am. The previous night, the surf had come up and the sound of it crashing kept me awake. Pains in my shoulder painful at nights also make it hard to sleep.

Tried to time it between sets but there was little gap. A salt shower made for a pretty effective refresh and wake-up call.

Bardsey sound had very rugged scenery and I enjoyed cruising around, making good progress. Until… the dreaded NE headwind picked up to 20knot-gusts at mid-day, almost stopping my movement completely. It felt like the dog-walker on the beach was going faster.

After hours of paddling against of energy-draining wind, I made it to trefor Harbour, to be greeted by thunder and heavy rain. Quickly cooked dinner in the downpour, and tried to sleep in my soaking-wet bed.

I went for early start to get tide push and before wind picked up, allowing me to get through Menai strait in one hit. This is the sea channel that separates Anglesey from mainland Gwynedd. The central region’s nicknamed the ‘Swellies’; there are strong, reversing tidal flows, rapid (5 knot) currents and whirlpools.
Unfortunately, my plan quickly failed, as I was hit with strong NE winds, making progress slow and lost hours battling to get to start strait.  Another struggle was that I couldn’t see the entrance, only beaches… this could’ve been a navigation error.
Finally, I saw tidal flow waves. Pushing on, I reached the entrance stream and stopped at Caernarfon castle. Realising I’d ran out of food, and so walked about a mile to a Tesco, to later find out there was a Morrisons next to the harbour… a bit of a face-palm moment.
Returning to my kayak I realised it was high tide… another face-palm. This meant the tide had reversed and I had lost my chance getting completely through strait. Concluded, I had to camp and paddled further up strait to find a campsite, making note of the disused shed I spotted… always good to have a Plan B.
Around the corner I saw Plas menai national water centre, where I stayed back-in-the-day on a fire fighters boat course. I stopped, hoping they’d let me camp and have a shower and met Caroline (the assistant manager) on the slipway. She generously gave permission for me to have a room and food. I was even treated to the use of a washing machine and a drying room… Heaven. 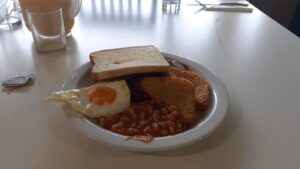 Impromptu Rest day due to Yellow warning of lightning. My paddles are carbon, so it’s basically like waving around a big lightening rod. Also the cursed north-easterly winds are still 20 knots. Luckily, Plas Menai agreed to let me stay another day!
During this time I planned the next, and probably the biggest, test so far. I had the decision of paddling to the Isle of man or taking the typical Liverpool shore route. 50 plus miles more than I’d done but those 10 miles could save 3 days at least.
The main factor was the approaching low would mean terrible weather on the Liverpool route. Or the Irish coast which would give me a Lee shore. Caroline is a yacht master and kindly double checked all my tidal flow calculations. I had a very good forecast to get to the isle and a good one together off the island the day after. So it was decided… to the Isle of Man!
to be continued….
Thank you for reading! The support and kindness everyone has shown, online and those I’ve met along the way, is what keeps me paddling on against the wind, currents and rain.