Started off the day packing up my usual wet gear.I was off to find the Caledonian canal and was looking forward to an easy day…
At the top of the Loch, there were some islands and lots of  buildings. I spotted a big Loch gate.  Perfect I thought, that must be it. There was a slip way, but that unfortunately led me onto a building site. Without other options, I ended up dragging the boat up a rocky bank. This was not ideal with a heavy boat and tired body. I hoped it would be easier the next few days.
I got my key, and saw there were 3 locks to get passed. It would take too long to maneuver through these on my kayak, so I had a trolley which I loaded it onto and I drag it along the bank. At various points, I had to handle the boat back onto pontoons. At least the surroundings were nice: the canal was wide and  trees, flowers and orchids lined either side. 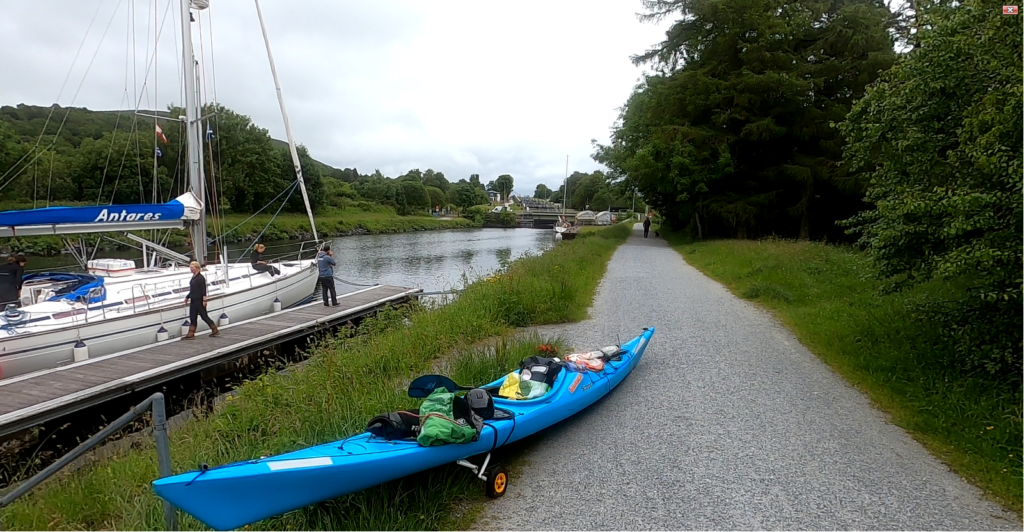 The first big obstacle was Neptune’s staircase. This consists of 8 locks in a row. This meant a long drag with the boat, but this was still much quicker than the canal boats going through these locks. 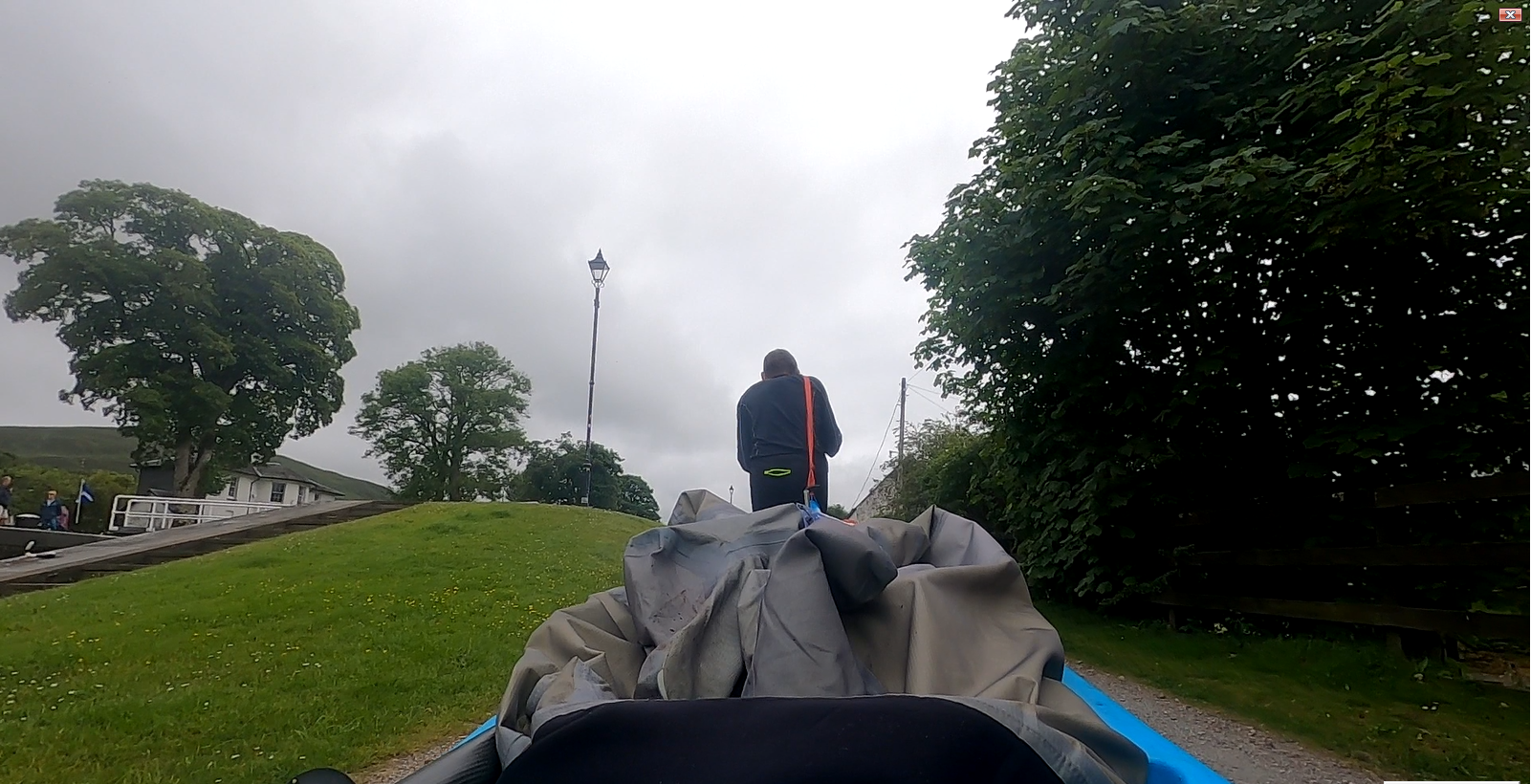 I got  through my first sections of canals. I found that it wasn’t always easy to portage the lock gates, especially for kayakers because the information and instructions are patchy. One information board sent me a long walk to a locked gate! Once there, the lock keeper helpfully told me it’s been locked for years…
By late afternoon, I got a reasonable distances up ‘Loch lochy’ . I begun looking for a campsite. Thankfully, I spotted a bit of sand to land the kayak on, accompanied by some flat grass, a stream and a few trees for shelter. Bingo! This was an actual designated, wild campsite.
I quickly got my tent up and cooker out. Time for dinner!
Loch lochy to Foyers
There was a good wind, strong and in the right direction. It meant that while the sea was quite wavy, I still covered lots of ground regardless. The sail became a massive plus!
There were still more locks to portage through the day. A big effort of loading and dragging the fully packed boat. At one lock, there was a cottage with a couple in the garden.  I thought it was worth asking if they could fill my travel mug with hot water for a noodle lunch and they kindly invited me to come in the garden and sit at the table. I was then treated to a big slice of cake.
Final day stop is Fort Augustus, a very nice place. I ate chips and had a quick shop, then headed out onto Loch Ness. The wind was strong and it felt like I was flying, a wonderful feeling.
However, the next time I set off, the waves became steep and slowly the boat started to feel odd: slightly tippy and the bow was riding high. I suddenly noticed- I forgot to pack the trolley away! The wheels had been in the water, causing the back deck to flood… oops. I headed straight to shore for an emergency landing. I discovered that the whole rear compartment (that contained all of my electronics) was flooded. Thankfully my dry bag did its job and protected my phone and equipment. A silly mistake!
There was a campsite halfway up the Loch that I was aiming for (hoping for a nice warm shower). Once I arrived, I could see it was a really nice one. It was also always good to chat to people every now and then, my kayak always sparked a conversation.
Loch Ness Foyles to Charnory Pt
There was another windy day, blasting down the Loch. The sail worked best when I paddled, so it was not an easy ride, but still a massive boost. Every now and then a boat came close by, heading the same way. My new game was to see how long I could keep up with them. One sailing boat came close by, a Norwegian flag on the stern. The crew were taking pictures and waving enthusiastically. Sailors seemed to always love the kayak sail.
The canal ends at Inverness, where there are sea lochs. This was a bit of unknown territory for me. The wind was so strong that it made me concerned for a rough sea. But my motto was now “tomorrow will be worse, make the most ground you can”- cheery I know.
At the last loch gates, I saw the sailing and powerboat I started with back at the start at Fort Willam. I asked the lock keeper at the side how to get to the sea, however he didn’t know. First things first I decided to take a trip to Aldi for food supplies.
Fuelled from my lunch stop, I dragged the boat on the trolley via some heavy lifting. This was a long distance. At the final gate, I had to clamber down a wall! But, I successfully made it to the North Sea.
The sea was quite calm, and I begun to head off to channory point, passing under the Inverness Bridge. It was windy, but the waves are small so it was a pleasant trip up the coast. I found a lovely campsite right on the beach. The owners, Mike and Rachel, support WDC and are dolphin fans, so they generously gave me permission to pitch. After a quick shower, I was off to the point to look for dolphins
Unfortunately, there were no sightings. I was still hopeful that I would see some the next day.

I stayed for as long as I could, but there were no sightings of dolphins the previous evening. I woke up to a lovely sunny and calm day. The forecast predicted increasing winds from the North East, reaching 20 knots by the evening – a head wind. I hoped this forecast was wrong ,and that the weather would be in my favour for once.
It was ideal dolphin-spotting conditions and still quite warm. I decided not to wear my dry top as I could always put it on later. The wind had not started, so I made good progress, but disappointingly, did not spot any dolphins. There were a few seals around but few sea birds, perhaps the fish just were not around, hence the lack of dolphins.
As the day went on, the wind and waves started to pick up. I started to have to paddle into them ,so I timed my paddle strokes to ensure that the boat didn’t crash over the waves and lose too much momentum. Up ahead, I could see what I thought was the headland point I needed to round. It looked flat with a few trees. Looking at google earth the night before, I’d seen Tain as a big sandy bay, but to be honest I only had a quick look as I wanted to finish watching Les Miserables. On the trip I had run out of songs to sing, so was trying to learn some new ones. The silence was usually fine while paddling, but sometimes I needed to just make a bit of noise.
The wind increased and a fishing boat came by to say hello. The fisherman cheerfully acknowledged that it looks like hard work paddling into the wind. I lacked preparation, was very fatigued, and was wishfully thinking that I’d soon pass the headland, and that with a change of direction wind should help me. But I had made a mistake. A large lighthouse came into view (lighthouses mean rough water and danger). What I thought had been a beach, changed into cliffs. I didn’t put my dry top on in time. It was too late. I felt like an idiot, looking at a whole section of nasty looking coast I needed to cover before the bay.
The sea started to pick up and got lumpy, with waves bouncing off the cliffs. The odd wave started to break over the boat. Not only does this water then go into the boat, but also down into my salopettes. A big problem. Water meant instability. If I capsized, I now would have no thermal protection , as I was now already cold. My bottoms could fill up and also make me heavier. I needed to concentrate on getting around to the bay. But really, I needed to raise my game.
My boat skills survived the test, but it was a needless risk. The bay was a lot bigger than I’d expected,so I still had a way to go. It had a lovely sand bed, with large dunes and loads of seals. I stopped to watch them. As it got late, I arrived near Tain. The tide was high, so I could get close to the town. I was warned that the tide can go out almost a 1km, but I didn’t have an issue, and soon found a lovely sand dune and grassy patch to camp on. 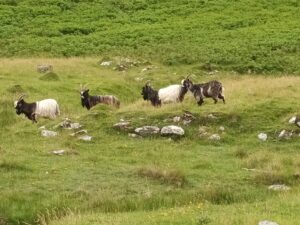 Tain was my most northern destination point where Bailey caravan company have a dealer who has agreed to take my boat and keep it stored until Bailey have a delivery, and can bring the boat back. The big question for me was whether to do that now, or go to John O Groats and drop the boat off on the way back. Like everything, it depends on the weather. If I went north and got stuck, it could add a week or two to the trip. I have a flight booked from Inverness for the end of June- as I had planned six weeks. I was behind schedule by about 10 days due to the storms. If I went North, I would have to extend the trip and reschedule the flight. It was decision time! 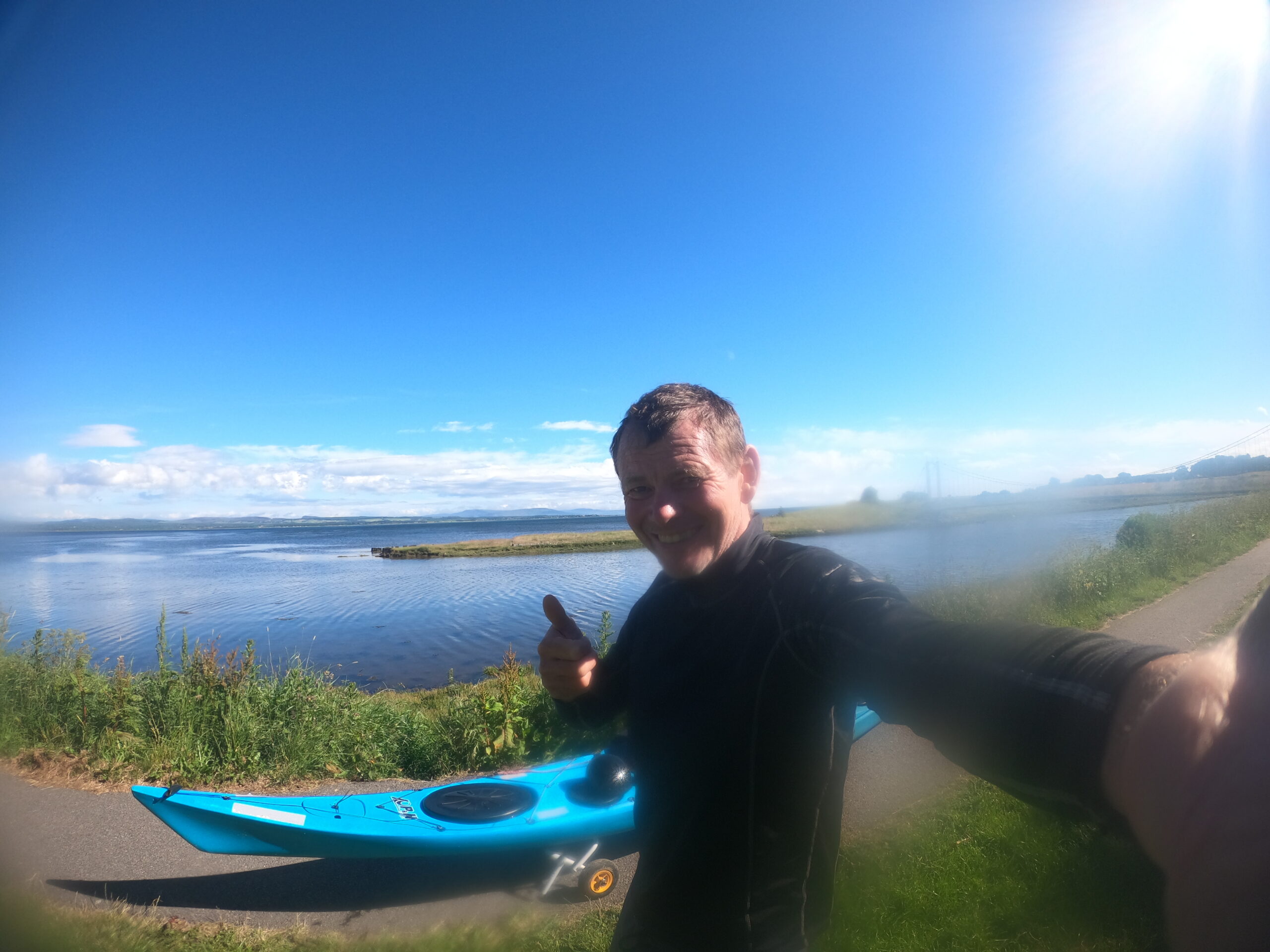